Chelsea head coach Maurizio Sarri was involved in a ‘heated exchange’ with Cesar Azpilicueta in a fiery team meeting after last week’s defeat to Arsenal.

The Blues were beaten 2-0 on January 19 and it is claimed the duo had some choice words when the players and staff met for a team meeting.


According to The Times the Chelsea captain spoke out against Sarri’s brutal criticism of the team in his post-match press conference.

The former Napoli boss was very unhappy with his side after their abject defeat against their London rivals at the Emirates.

The Blues succumbed to goals from Alexandre Lacazette and Laurent Koscielny as Arsenal enjoyed just their second win in 14 meetings with Chelsea.

Sarri’s side are just three points ahead of both Arsenal and Manchester United in fourth place, and the Italian let his players know their performance was unacceptable.


‘I’m extremely angry, very angry indeed,’ he said after full-time, speaking in Italian and using his interpreter to ensure his message got across.

‘This defeat was due to our mentality. I can’t accept it. We had a similar issue against Tottenham in the league. It appears this group of players are extremely difficult to motivate.

‘From a technical point of view both teams were on the same sort of level, but they had a higher level of determination in both penalty areas, so tactics don’t come into it. I can’t possibly say I am not partly responsible for the defeat. We have to share it.

Azpilicueta is said to have received backing from Willian during the row at the club’s training base.


There was no need for any repercussions though as Azpiliceuta played 90 minutes in the League Cup win over Tottenham on Thursday.

Sarri also used the Spaniard as an example of one of the few natural leaders within the team this week so their relationship does not appear to be strained.

Sat Jan 26 , 2019
Bayern Munich are hoping a new bid of £40million will persuade Chelsea to sell their youngster Callum Hudson-Odoi, according to reports. The 18-year-old has been offered a new contract by Chelsea worth £85,000 a week, but his eyes are reportedly set on a transfer to Bundesliga with RB Leipzig joining […] 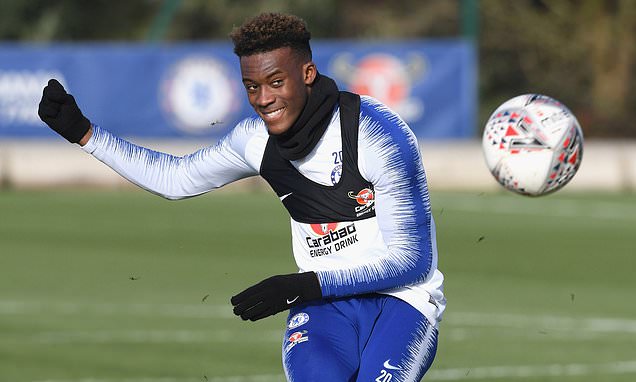