Maurizio Sarri concedes he is ‘worried’ for his Chelsea side after Sunday’s embarrassing loss to Manchester City.

But the Chelsea manager refused to be drawn on whether the 6-0 loss could cost him his job at Stamford Bridge.


A Sergio Aguero hat-trick, a Raheem Sterling brace and a goal from Ilkay Gundogan was enough for City to thump Sarri’s Chelsea at the Etihad.

The loss has led to speculation over Sarri’s future in west London and the manager says he ‘does not know’ whether he will discuss the situation with the board this week.

Sarri said he was surprised by the defeat as he was happy with how the team trained throughout the week.

He added: ‘My feeling this week was really good. It was good during training and the technical meeting and the warm-up.


‘The goal after three minutes made it very difficult to play against these opponents, who played fantastic football.

‘The motivation today was good. We were not able to stay in the match and react later.

‘I have to analyse the match and what happened. Maybe we were a little bit unlucky but we had to adapt. First of all I want to see it alone and then I will decide.’


‘We are lucky to score three from the first four actions. After 3-0 they were much better than us and after 5-0 it was not easy for them.

‘Chelsea take the ball, play incredible, so that’s why I am very pleased after we played Arsenal, Everton and had a few days to recover.

‘To scored six against Chelsea and the way we played, we had so much attention. We did it, it’s an incredible compliment to the players, they are outstanding.

‘We spoke this morning, we trained set pieces, trained some movements and I never thought we would score this amount of goals.’

Chelsea have now dropped to sixth on the Premier League table, below Arsenal on goal difference.

Mon Feb 11 , 2019
Phil Jones said Manchester United were a “laughing stock” under Mourinho this term, but they are “now heading in the right direction” with Ole Gunnar Solskjaer incharge. Mourinho was sacked in December amid United’s poor run of form and with reports of dressing-room unrest at the club. United were outside […] 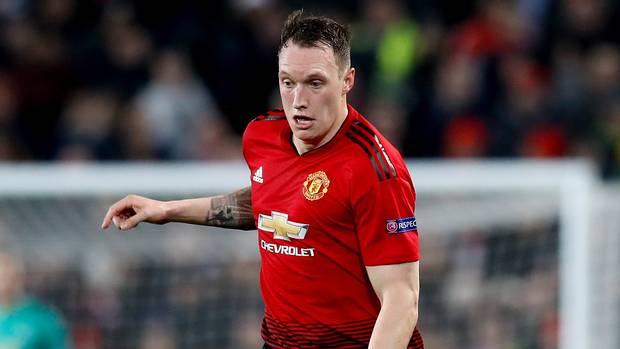