Chelsea are understood to be very concerned about the team’s recent poor performances and results – the most recent of which was a home defeat to Manchester United that eliminated them out of the FA Cup.


The board are aware of the problems at the club, especially after the reaction of fans at Stamford Bridge on Monday, who booed the team off and slated his ‘Sarri-ball’ style.

Sarri was put under increasing pressure after a 6-0 hammering at Manchester City this month – their third Premier League loss in four matches – saw them drop out of the top four to sixth.

The Blues had conceded four away at Bournemouth in the previous match after a 2-0 loss to Arsenal at the Emirates, after which Sarri questioned his players’ motivation.

Sarri’s assistant, Gianfranco Zola – defended his boss’ position in the build-up to the United defeat, claiming they were going through a tough spell.


Zola also said the players do care, and compared their situation to the difficulties Pep Guardiola encountered during his first year at the Etihad.

But Sarri conceded he was concerned about the result to United, stating his team had played “confusing” football in the second half.

“I am worried about the result not our fans,” he said. “Of course I can understand their frustration. The result was not very good. We are out of the FA Cup.


“We played confusing football in the second half but in the first half I think we played well. We need more aggression and more determination in the situations inside our own box and inside the opposition box. The difference was there.”

Wed Feb 20 , 2019
Liverpool manager Jurgen Klopp says he was annoyed that Niko Kovac made him wait so long to shake his hand after Tuesday’s Champions League stalemate with Bayern Munich. The German champions managed to keep a clean sheet at Anfield, with Liverpool made to rue their profligacy in front of goal, […] 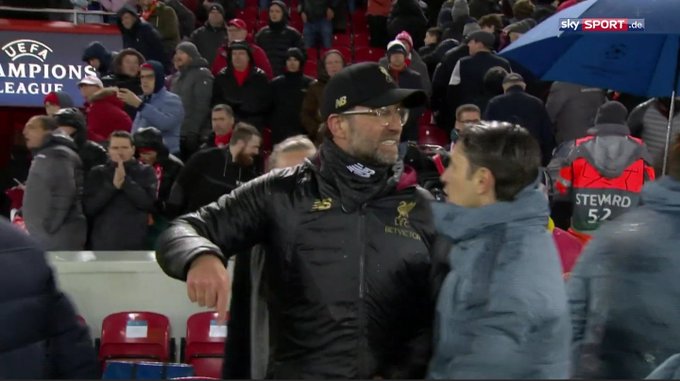