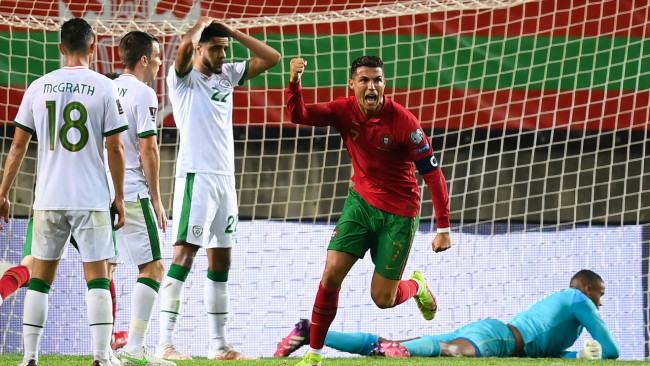 Cristiano Ronaldo became the top scorer in the history of international football as he scored two late goals to hand Portugal a 2-1 win over the Republic of Ireland.

The 36-year-old went level with Iran’s Ali Daei on 109 goals with a double in Portugal’s Euro 2020 group-stage game with France in July and the record will have been at the forefront of his mind heading into today’s World Cup qualifying clash at the Estadio Algarve.


Ireland had looked set to pull off an upset away from home after John Egan’s opener, but Ronaldo scored two late goals to seal all three points for the hosts, taking his tally up to 111 goals from 180 matches for his country.

The result saw Portugal go three points clear of Serbia in the group. Ireland, meanwhile, are still yet to get a point after three matches and find themselves down in fourth place.


‘I’m so happy, very happy, and not only because I beat the record but for the special moments that we had,’ Ronaldo told Sky Sports after Portugal’s dramatic win.

‘Two goals at the end of the game, so tough, but I have to appreciate what the team did tonight. We believed until the end. ‘For the supporters, I’m so glad.’

Ronaldo said he ‘still believed’ Portugal could come away from the Group A game with maximum points while Ireland held a late lead after his missed penalty.


‘Sometimes you score, sometimes you make mistakes and that’s just part of the business. ‘But I still believed until the end of the game so I’m so glad to score and to win the game.’

Ronaldo also applauded Iran legend Daei for ‘setting the standards’ and ‘holding the record for so long’ before him in a lengthy Instagram post uploaded after Portugal’s win.

‘I can’t even start to express myself in words! I’m thrilled with an overwhelming sensation! Let’s go, Portugal! Let’s go!’ Ronaldo said.

‘From all the records that I have broken during my career – and fortunately there have been a few – this one is very special for me and it’s certainly on the shelf of the achievements that make me truly proud.

‘First of all, because every time I represent my country is a special moment, for knowing that I’m defending Portugal and showing to the world what Portuguese people are made of.


‘Secondly, because national teams competitions have always had a very strong impact in me as I was growing up, watching my idols playing for their flags every other summer in Euros and in World Cups.

‘But finally and above all, because scoring 111 goals for Portugal means 111 moments like the ones we experienced today in Algarve, moments of worldwide union and happiness for millions and millions of Portuguese citizens all around the globe. For them, every sacrifice is worth it.

‘Another reason for me to appreciate this achievement as much as I do right now, is because Ali Daei has set the standards in such a high level, that at some point even I started thinking that I might never catch him. Congratulations to the “Shariar” for holding the record for so long and thanks for always showing so much respect for me every time I scored and as I became closer and closer to his outstanding number.

‘Thank you Portugal. Thanks to all my teammates and opponents for making this journey so unforgettable. Let’s keep meeting inside the pitch in the years to come! I’m not closing the count just yet…’

3 weeks ago
Manchester United skipper Harry Maguire says the club have added the ‘greatest player’ to their squad by completing an ‘amazing’ deal to sign Cristiano Ronaldo. In a shocking turn of events last Friday, Ronaldo had looked set to damage his Old Trafford legacy by securing a move to United’s bitter rivals Man City. But […] 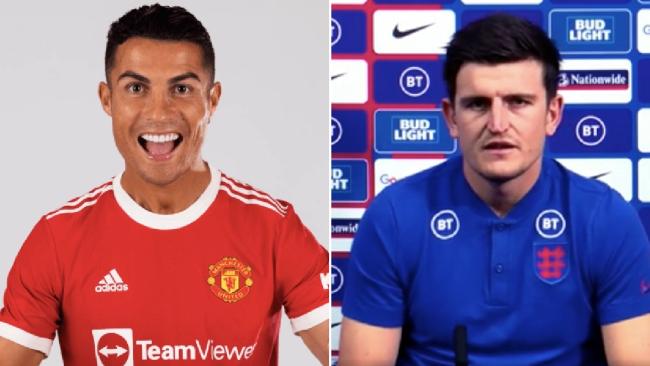