Ryan Giggs has revealed the criticism Ole Gunnar Solskjaer had of Manchester United under Jose Mourinho earlier in the campaign.

United had a hugely disappointing start to the 2018-19 season, dropping to eighth in the Premier League and crashing out of the Carabao Cup.

Manchester United finally decided to sack Mourinho in December and named Solskjaer as his replacement as interim manager.


And United look transformed under Solskjaer, winning their last six matches including Sunday’s victory over Tottenham at Wembley.

Giggs says Solskjaer has helped ‘remind the players how good they are’ and said the interim head coach was critical of Mourinho’s use of his full-backs before his sack.

Asked about the changes Solskjaer has made at the club, Giggs told Premier League Productions: ‘Well, reminding the players how good they are.

‘It’s little tweaks. It’s like you see with golfers. Just a little tweak to the game that someone else on the outside might have seen.

‘Ole’s been to a few games before he took over. I was at a game next to him, and he was pointing out to me: “Look at the full-backs, they’re not high enough.”

‘Things that we were used to, things that you associate with Man United teams.

‘OK you score two, we’ll score three and I think he’s instilled that back into them that we need to score goals, we need to attack and if we’re all higher up the pitch then it just poses the opposition that question.

‘All of a sudden teams are going from, “right it’s Man United, we’ve got a chance today” to actually, “oh yeah, we’ll be defending, we’ll be deeper”.

‘With the front players that United have got, not only the starting players but the ones coming off the bench, you’ve seen [Alexis] Sanchez, you’ve seen [Romelu] Lukaku now having an impact.

‘It rivals any team within the Premier League the firepower that United have got.’

Manchester United’s win over Spurs saw the club move level on points with Arsenal. They are six behind Chelsea.


David de Gea made a number of great saves to deny Tottenham and Solskjaer believes the Spaniard can be United’s greatest goalie.

‘We’ve had some great keepers at this club and I think he’s challenging both Edwin and Peter for the number one spot historically,’ he said.

‘We had a good back four and David in behind them was unbelievable. You are allowed to have a good goalkeeper.

‘I’ve played with a few fantastic goalkeepers. We have a tradition of having them and he has grown and grown. He deserves that man of the match today.’

Tue Jan 15 , 2019
Chelsea winger Eden Hazard is “waiting” for Real Madrid to make a move to sign him, according to Belgian football expert Kristof Terreur. The 28-year-old has refused to commit his future to the club despite confirming that he and his family are happy in London. With just over a year […] 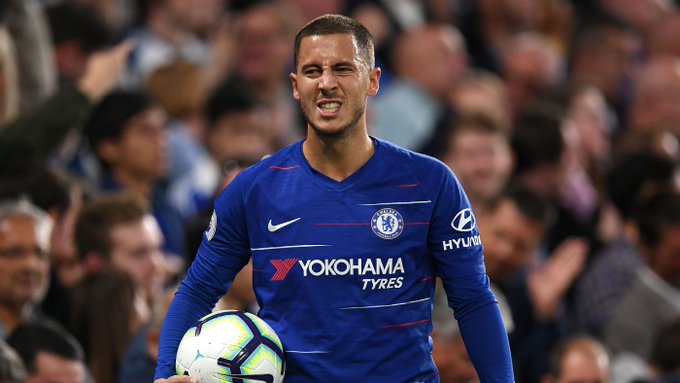