Alexis Sanchez was involved in a heated training ground bust-up with Manchester United academy graduate Mason Greenwood, with angry words exchanged between the pair, according to reports.


The former Arsenal forward is desperately trying to build up his fitness after returning from the Copa America campaign with a hamstring injury that he picked up in the third place play-off.

In one of his first training sessions back at the club after his injury, Sanchez was fouled by the youngster, leaving the 30-year-old furious, according to The Sun.

His move to Old Trafford from the Emirates has been nothing short of disastrous so far but United boss Ole Gunnar Solskjaer has told him he remains a part of his plans in the team.

However, The Chile international is behind his team-mates in terms of his schedule as he continues to build up his fitness and has worked away from the team with the aim of getting up to speed.


The forward was left out of the squad to play Chelsea but he is back in training and can be expected back in action sooner rather than later.

Greenwood came off the bench during the 4-0 victory over Frank Lampard’s side on Sunday and is set to get an opportunity to shine in the first team this campaign.

Solskjaer is determined to give young players chances to state their case for a spot in the first team, but he has left the door open to former Barca attacker Sanchez to finally show his best form at the club

In other news, Injured central defender Eric Bailly, who isn’t expected to feature on the pitch until Christmas, is currently resting.


The Ivorian star has had his knee operation and the long rehabilitation ahead of him will commence very soon.

Wed Aug 14 , 2019
Liverpool midfielder Gini Wijnaldum has revealed how Jurgen Klopp gave a pre-Champions League final meeting in Cristiano Ronaldo underpants prior to their 2018 game with Real Madrid. The pressure was on Liverpool as they headed into their first European Cup final since 2007, while Real Madrid were aiming to win their third […] 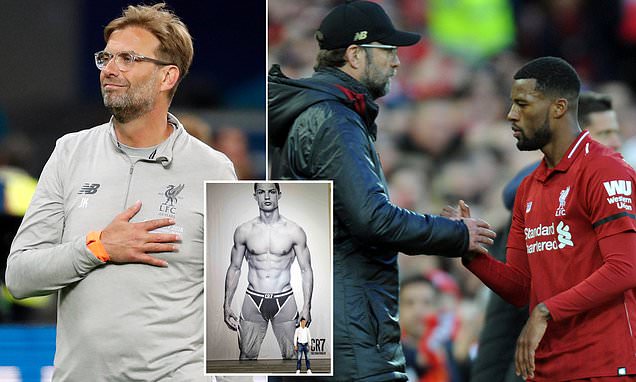