Ole Gunnar Solskjaer was delighted at Manchester United’s 2-0 Europa League quarter-final first leg victory over La Liga side Granada, though conceded it was not a “perfect night”.

Harry Maguire, Luke Shaw and Scott McTominay were all booked and will now miss next week’s second-leg at Old Trafford through suspension.


United will be firm favourites to reach the semi-final due to the two away goals scored by Rashford and Bruno Fernandes in each half. Yet the suspension means Solskjaer will be without his skipper, first-choice left-back and midfielder.

The United boss said: “It was not a perfect night. We got three yellow cards and three suspensions [but] 2-0 is very good result. We know how difficult it is to come to Spain. It’s created a good starting point for next week’s game – then we’ve got to play well to get a result.

“We want to win every game – football catches you so quickly if you rest. We can’t have any other approach. It’s still a young team, a learning team, and we have to improve all the time.”

Rashford’s opener in the 31st minute was his 20th goal of the campaign and derived from a superb touch that controlled Lindelöf’s pass. Fernandes’s goal came through the penalty spot on 90 minutes, after he took a blow to the eye.


Solskjaer said: “They [Rashford and Fernandes] have been exceptional, so important for us. It was a very good run by Rashford, he takes the ball fantastically. Bruno is so confident on penalties even though the keeper almost saved it.”

Solskjaer added: “I’ve just seen his eye when he came off [at the end] – he got hit and it’s red, so to score with one eye open shows skill.”


Shaw also took a knock and was had to be replaced by the manager at the break. “I had to protect Luke – I think and hope he should be okay for the weekend [trip to Tottenham],” Solskjaer said.

Daniel James said: “It’s a massive win for us and getting a clean sheet was important. There’s still a second leg we’ve got to concentrate on but we have to recover.”

Fri Apr 9 , 2021
Arsenal midfielder Granit Xhaka was left furious with the club’s defence after Thursday night’s 1-1 draw with Slavia Prague in the Europa League. Arsenal thought they were heading for a quarter-final first-leg victory over Slavia Prague at the Emirates Stadium after Nicolas Pepe scored a late goal in the 86th minute. But Mikel Arteta’s […] 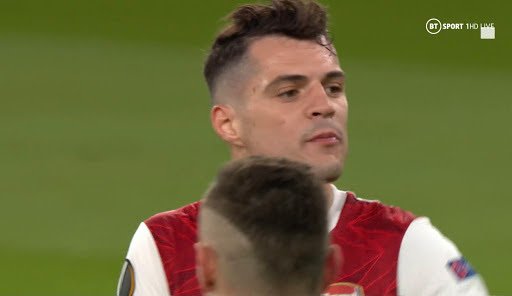