Manchester United’s interim manager delivered that damning verdict to his injury-ravaged team after their goalless Premier League draw with Liverpool on Sunday.

Ole Gunnar Solskjaer picked apart Liverpool’s tactics when he discussed it with United players before the 0-0 draw at Old Trafford.


A United source said: “Ole was very blunt about Liverpool with his players and clearly believes they do not have enough to beat City to the title.

“He thinks they are very one dimensional, lacking creativity.

“He certainly has faith that his team are a better outfit.”

Solskjaer is said to have claimed Liverpool can only play on the counter – and struggle when they are forced to break teams down through passing game because they have no creativity since selling Philippe Coutinho.

Solskjaer also warned the first goal was important in Sunday’s gane as Liverpool were far less effective if they don’t open the scoring of a match.

United completely shut the table-toppers out on Sunday with goalkeeper David De Gea barely having a save to make throughout the game.

United are also on a better run of form in the  Premier league than Liverpool since Ole Solskjaer took charge at the club.


He praised his players in the dressing room after the match at home for their ‘amazing team spirit’ given it had been a very difficult game.

United had to deal with three of their players going off injured in the first half in Juan Mata, Jesse Lingard and Ander Herrera.

Marcus Rashford also had to play with injury through the game after an early heavy tackle and was in pain afterwards.


His ankle is badly swollen making him also a huge doubt for their game at Crystal Palace as well as the three who had to be substituted.

REVEALED: How Kepa mocked Caballero when they squared up in furious dressing room row after City defeat

Wed Feb 27 , 2019
Kepa Arrizabalaga reportedly told Willy Caballero he was the better goalie after refusing to be taken off during Chelsea’s Carabao Cup final loss to Manchester City. Maurizio Sarri wanted to introduce Caballero in the extra-time after Kepa went down with cramp at Wembley, but the Spaniard refused his manager’s instruction […] 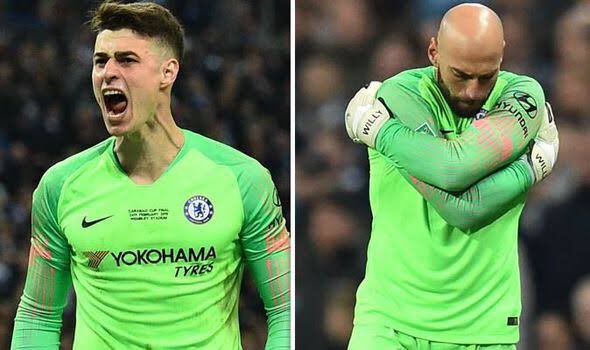