Virgil van Dijk has said Liverpool’s players can cope with manager Jurgen Klopp’s ruthless squad rotation, conceding the only alternative would be to exit the club.

Klopp has made a several changes throughout Liverpool’s unbeaten start to the campaign, which, even though the winning run came to an end, was extended to seven Premier League matches with a 1-1 draw at Chelsea.


Daniel Sturridge showed the strength in depth Klopp now has by scoring an outstanding late equaliser, which cancelled out Eden Hazard’s goal.

The striker had been sent on to replace James Milner after Klopp had made two other changes by replacing captain Jordan Henderson with Naby Keita and sending on Xherdan Shaqiri to take over from Mohamed Salah.

Shaqiri had been taken off last week at half-time after helping Liverpool into a 3-0 lead against Southampton.

Managing his squad and the number of options he has now may prove to be Klopp’s biggest challenge in attempting to overthrow Manchester City this season.

But Van Dijk insists Klopp will not be met with any opposition from his players, who understand that they may no longer start every game.


“You have to (understand), otherwise you better leave,” said Van Dijk. “We all want one thing, we all want to be successful, everyone, and we need everyone’s help.

“It’s a long season with a lot of games, we need everyone and everyone knows that as well, and that’s a big strength for us. Everyone is doing their bit because the season is long.”

Salah has scored three goals this season, but is yet to recapture the form of last term, when he was voted Player of the Year, and suffered a disappointing evening at Stamford Bridge where he missed a couple of attempts.

But Klopp has warned that anyone who attempts to write off Salah will end up looking stupid, even though he plans to talk to the Egyptian about it.

Asked if Salah is happy with his performances, Klopp said: “Of course not. How could he? Of course not. Now, that is what you have a manager for. We will have a talk about it.


“It is easy for me because I do not read what you write, but the boys do a little bit more. You will now do like a doctor, dissect. A big nice cut and, wow, you will find pretty much nothing. Then it will be good – at the end whatever you write you will say sorry afterwards.”

Van Dijk backed up his manager’s words, saying Salah is proving in training that he will get back to his best.

“He’s still the same Mo and he needs a bit of luck as well, I’m not worried at all and he should not be worried either,” said central defender Van Dijk.

“We do it all together, we’ll always be there for him and he’ll deliver as well. He had a tough game, but it’s part of football.

“We are seven games in, the season is very long, he’s working hard and is doing it in training.”

Mon Oct 1 , 2018
Maurizio Sarri concedes he has been pleasantly surprised by the ability of David Luiz and says the defender was “confused” by his lack of game time under former Chelsea manager Antonio Conte. Luiz had been an important figure in Chelsea’s title-winning campaign in Conte’s first year as head coach, but […] 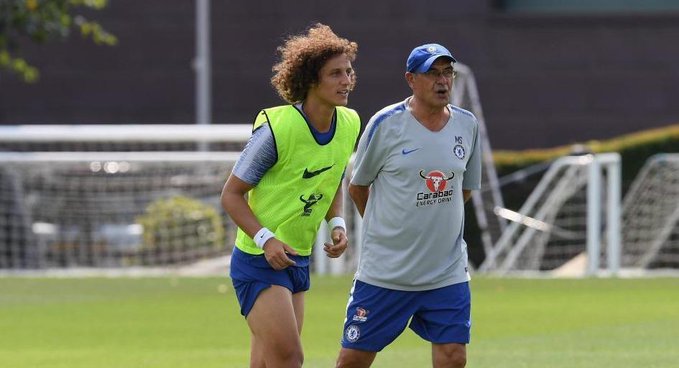