Chelsea midfielder Jorginho agreed terms on a move to City before moving to Stamford Bridge, but Napoli failed to agree a fee with the English champions, the player’s agent has confirmed.

The Italy international signed for the Blues for £52m after leaving Serie A, following Maurizio Sarri to the club who left Napoli to replace Antonio Conte as head coach this summer.


The 26-year-old has made a blistering start to life in the Premier League, featuring in all four of Chelsea’s opening games at the start of the 2018-19 season.

Jorginho has slotted into the starting XI with ease and impressed with his slick technical ability and astute positional sense as Sarri’s men have won all of their matches so far.

However, as reported in April, London was not his first choice destination during the transfer window as City had lined up a deal to bring him to Manchester.

Jorginho’s agent, Joao Santos, has now backed those reports and stated that his player initially agreed on a move to Manchester City.


He told Radio Kiss Kiss Napoli on Thursday: “It was all done with Jorginho. There was an agreement, but there was no agreement between the clubs. All parties have to agree, and one did not.

“Then Chelsea asked what the situation was after Sarri arrived and Jorginho went to London.”

Santos then went on to state that Jorginho has quickly put the disappointment of that failed transfer behind him and claimed that he already feels at home with the blues after his winning start.

“He’s really enjoying it at Chelsea, the team is on a roll and has won four matches out of four,” added Santos. “It’s a great start.

“Going to Chelsea was a unique opportunity, the career of a player is very short and now we hope for the best.”


The former Napoli midfielder has been selected for Italy’s squad ahead of Friday’s friendly game against Poland, under the new national coach Roberto Mancini.

Ozil disappointed me on a human level – Joachim Low

Fri Sep 7 , 2018
Germany boss Joachim Low expressed his disappointment at Mesut Ozil on “human terms” after the Arsenal midfielder’s retirement from international football. In the wake of World Cup early exit, Ozil felt he was made a scapegoat and chose to quit the international game, citing racism as one of the reasons […] 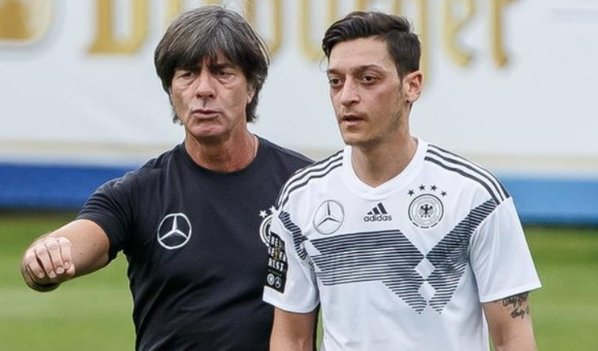