Zinedine Zidane has informed close associates that he has plans to be manager at Manchester United.

Jose Mourinho is under intense pressure after a summer of public rowing with France midfielder Paul Pogba and executive vice-chairman Ed Woodward.

United only brought in Fred, Diogo Dalot and Lee Grant in the summer transfer window, despite Mourinho’s desire to sign a top-class central defender.


While Mourinho has no plans to step down from his position as manager, United’s board have already drawn up a list of potential replacements which includes Zinedine Zidane.

According to The Daily Mail, Zidane has told friends that he expects to receive an offer from United if Mourinho is sacked in the coming months.

He’s also made it clear that he is interested in the role to be United’s head coach should it be made available this campaign.

‘Why would we discuss him when there is no job available?’ a senior source at United said when discussing the rumours surrounding Zidane.


Zidane has been out of a job since leading Madrid to a third consecutive Champions League title.

The French icon was seen as Didier Deschamps’ potential successor but their World Cup triumph has ended those rumours.

Paul Ince claimed that Mourinho has turned United into a ‘laughing stock’ after a tough start to the season.

‘Other clubs and fans are having a field day at the minute, seeing what is happening at Man United. They’re becoming a laughing stock, and falling behind,’ Ince said.


‘You would never have seen this going on with Sir Alex Ferguson as manager, especially not playing out in public. At Man United, everything from top to bottom is in turmoil, and it shows.

‘Should Mourinho leave? No. Should Man United as a club get their house in order? Absolutely. That’s the whole lot. From the top down, Ed Woodward, Jose Mourinho, Paul Pogba, everything is a total mess.’

Mon Aug 27 , 2018
Real Madrid manager Julen Lopetegui said he will decide his goalkeeping situation on a game-by-game basis after new signing Thibaut Courtois was made to wait for his debut. Courtois swapped Chelsea for European champions Madrid in a £35 million move but the Belgium international was on the bench for Sunday’s […] 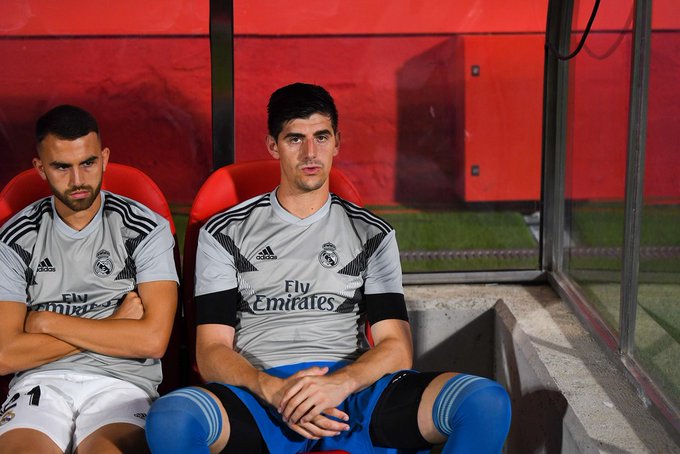