Barcelona have placed a third bid of around £55million for Brazil international winger Willian.

The La Liga giants have had two bids rejected by Chelsea this summer for the Brazil star as Maurizio Sarri is keen to keep the attacker.

Barcelona’s first bid of £50m was followed up with another of around £53m but the Spaniards hope to finally land the 29-year-old with a bid in the region of £55m, Sky Sports reports.


Manchester United are also interested in Willian and could match the offer from Barcelona but Chelsea would rather sell the Brazilian abroad if they were to let him go.

Willian was determined to exit Stamford Bridge had Antonio Conte stayed in Chelsea but the club hoped Sarri’s arrival would make him stay.

The Brazil attacker remains on holiday after Brazil’s quarter-final exit from the World Cup and Sarri conceded in his first press conference for the club that he will wait to speak to players in person before deciding what happens with their futures.

Should Chelsea allow Willian leave, they will look to sign former Liverpool target Nabil Fekir, The Frenchman who passed a medical to join the Reds in July but Liverpool attempted to renegotiate a fee after having doubts about the France international’s knee.


Willian’s exit would possibly increase the chances of Eden Hazard staying at the Bridge with the Blues prepared to reject offers from Real Madrid.

Sat Jul 21 , 2018
Cesc Fabregas has promised Chelsea supporters he is doing all he can to convince Eden Hazard to remain at the club. Hazard revealed after the World Cup he wanted to leave, but insisted he would not force Chelsea to sell him. Just a week after Hazard’s admission, Chelsea are reportedly […] 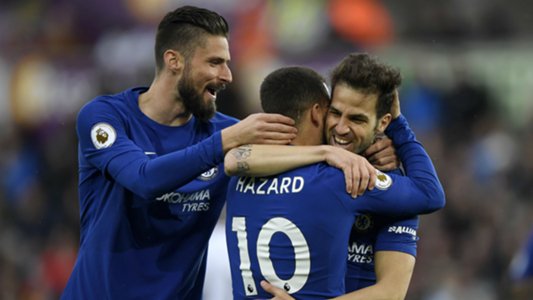