Eden Hazard says he is enjoying the football played by new Chelsea head coach Maurizio Sarri far more than when the club were managed by Antonio Conte and Jose Mourinho.

Sarri took over in the summer, bringing his attacking, possession football to Stamford Bridge, and the club have had four straight victories to sit second in the
League table behind Liverpool on goal difference.


Hazard scored again against Bournemouth on Saturday, and is enjoying the freer-flowing football a orchestrated by Sarri compared to his predecessors.

Asked if he is enjoyed Chelsea’s new style, Hazard told the club’s official website: ‘Of course, I like to have the ball. Not in my own half, but in the last 30 metres.

‘I like this type of game, it’s completely different from Antonio Conte or Mourinho before. Like I say, we have more of the ball so for me it’s not bad.’

Sarri brought midfielder Jorginho with him from Napoli, as well as signing Mateo Kovacic from Real Madrid on loan, and Hazard says the pair are having a big impact.

‘I think the big difference is we bring in two players, Jorginho and Kovacic, and they are completely different,’ the Belgian continued.

On Chelsea’s form, he added: ‘At the moment we are okay, we are winning games, I think we are playing good football, so I enjoy.

‘I want to keep this momentum. The bad thing is now we go to the national team, we want to just keep playing with Chelsea and win games!’

Sun Sep 2 , 2018
Juventus manager Max Allegri is confident Cristiano Ronaldo will find his scoring touch for Juventus after the Portuguese extended his wait for a Serie A goal to 270 minutes. The 33-year-old, who swapped Real Madrid for Juve over the summer in an £88million switch, has played all three games for […] 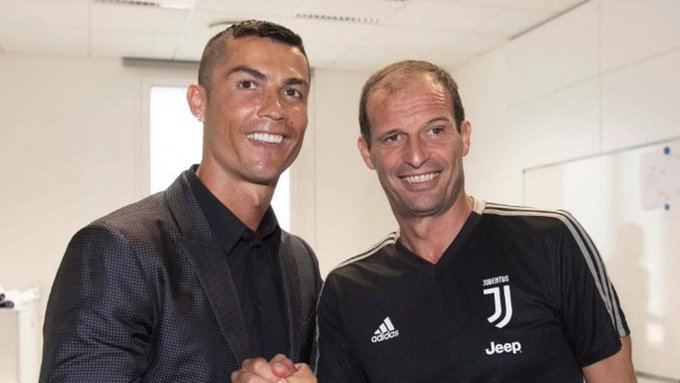