The two European giants will renew their rivalry at Camp Nou on Tuesday after Manchester United lost 1-0 to FC Barcelona in the first leg of the tie.

Luke Shaw’s first-half own goal sealed a 1-0 victory for Barcelona to give the La Liga leaders a lead to protect at Camp Nou.

Manchester United have already caused one big upset in the knockout stage of the Champions League after they ran out 3-1 winners against Paris Saint-Germain at Parc des Princes.

Although Barcelona are comfortably sitting at the top of La Liga, Ernesto Valverde’s team are far from invincible, having already lost twice in the league this season.

Manchester United have previously lost to Barcelona in their last two Champions League final games in Rome and London in 2009 and 2011.

However, United have beaten Barcelona in both of their two-legged ties in the Champions League since it was rebranded in 1991.

Speaking to Russia Today about who will reach the Champions League semi-finals, Mourinho appeared to say that Barcelona would join Seria A giants Juventus in the last four of the competition.

“But as I was saying I wouldn’t be surprised if one of them or both stay behind.”

Jose Mourinho was sacked by Manchester United back in December after the club’s form became very poor.

Mon Apr 15 , 2019
Kevin De Bruyne has revealed how Jose Mourinho made an attempt to belittle his performances during a meeting which led to the his Chelsea exit. Having impressed during a season-long loan spell at Werder Bremen, De Bruyne looked set to fight for a first-team place at Chelsea after returning to […] 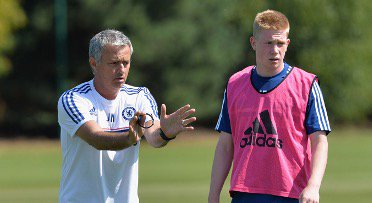