Manchester United head coach Jose Mourinho has joked his Wembley fall was deliberate – so as to give the media something to write about him during the break.

The video of Mourinho falling while attempting to jump over the rope barrier at Wembley ahead of England’s 2-1 loss to Spain last week’s Saturday, has been trending on social media.


Despite embarrassing himself, the Manchester United boss faced up to his mistake while speaking at a news conference on Friday before his team’s game with Watford.

During his news conference, Mourinho made reference to his critics who he claims are very much “obsessed” with him.

When pressed to identify his critics, Jose said: “It’s the people that call me and ask me to fall at Wembley because they need news from me.

“I did it on purpose so you [the media] could speak a little bit about myself.”


When asked if he hurt himself, Mourinho said: “No. It was a good dive and I protected my phones. No penalty and maybe a yellow card.”

Mon Sep 17 , 2018
Juventus head coach Massimiliano Allegri slammed his player Douglas Costa for spitting in the mouth of an opponent. Costa was shown a straight red card in the game against Sassuolo when he clashed with Federico Di Francesco, and appeared to spit in his mouth. Images of the incident have sparked […] 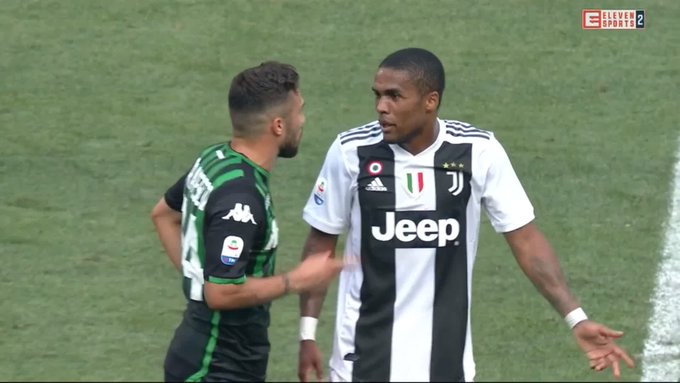