There was the possibility of a return to Old Trafford for the five-time Ballon d’Or winner but Mourinho didn’t think the deal made sense financially.

He told Woodward not to splash out a £90million transfer fee and wages of £500,000-per-week, according to the Mirror.


Ronaldo ended up leaving Real Madrid to join Juventus and will face United in the Champions League after both teams were both drawn in Group H.

On facing Ronaldo in Europe, Mourinho said: ‘Juventus were always a big candidate but they have transformed themselves into the biggest candidate because they don’t hide that the investment they have made has been made to win it.

‘I think Cristiano will like coming back as he was happy to come back when he was at Real Madrid.

‘But he comes back to do a job for them, like he did for Real Madrid. He is still a top player – unless he fails to score this weekend and you tell me he is not a good player anymore!’


Part of the reason Mourinho wanted to avoid a huge fee on Ronaldo was to use those funds to strengthen his defence.

United targeted Harry Maguire, Toby Alderweireld and Diego Godin but failed to bring in any defender.

The Portuguese is believed to be angry that club bosses refused to invest more than a total of £75m on Fred, Diogo Dalot and Lee Grant.

Those defensive woes have been emphasised by United’s poor start to the season, conceding a combined total of six goals in their defeats to Brighton and Tottenham.


The pressure has now ratcheted up a notch on Mourinho and another defeat against Burnley could bring his tenure at United to an end.

Sun Sep 2 , 2018
Eden Hazard says he is enjoying the football played by new Chelsea head coach Maurizio Sarri far more than when the club were managed by Antonio Conte and Jose Mourinho. Sarri took over in the summer, bringing his attacking, possession football to Stamford Bridge, and the club have had four […] 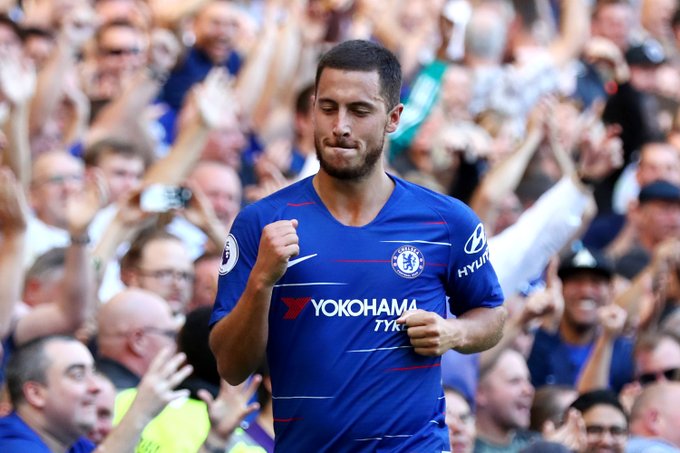