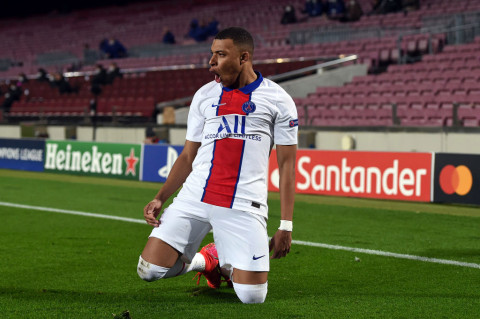 Kylian Mbappe was the hero as Paris Saint-Germain thrashed Barcelona 4-1 at the Camp Nou and Mauricio Pochettino revealed he had predicted a victory even before the match.

Mbappe was at his best as he scored a hat-trick in the first leg of their last-16 Champions League tie, with Lionel Messi and Moise Kean scoring the other goals.


Pochettino was taking charge of his first Champions League game in charge of the French side after Thomas Tuchel – who is now the manager of Chelsea – was fired despite guiding them through the group stages.

The former Tottenham manager had only won once at the Camp Nou, during his spell at Espanyol, but delivered a famous second win to put PSG in control of the two-legged tie.

And Pochettino revealed that Mbappe had assured him about the result before the game. ‘Yesterday, at training, he asked me how many times I had won at the Camp Nou,’ said Pochettino.

‘Once, I told him. He replied to me: “Tomorrow, we are going to win a second time.” He is a top player.’


PSG, who are currently second in Ligue 1, will defend their three-goal lead in the second leg on March 10. But, despite the big win, their progress is not yet guaranteed.

Four years ago, Barca recovered from a four-goal deficit to win 6-5 on aggregate courtesy of an outstanding 6-1 win at the Camp Nou. However, this time, they will need a similar epic display in Paris.

2 months ago
Gerard Pique and Antoine Griezmann’s frustration turned into an on-pitch argument as Barcelona were beaten comfortably 4-1 by PSG in the Champions League on Tuesday. Pique, playing his first game since suffering a right knee injury in November, shouted at his teammates to “keep the f—ing ball longer” as they were about to defend a corner. Griezmann responded […]