Paul Pogba was involved in a heated altercation with Manchester United supporters after the team’s 2-0 defeat to Cardiff City at Old Trafford for the final game of the season.

The Red Devils signed off a dismal season with a loss against the relegated Bluebirds and it meant they finished as close to relegation as they did to champions City.


United put together an unbeaten run for three months when Ole Gunnar Solskjaer replaced Jose Mourinho as manager in December but United have been disappointing in recent weeks and have won just two of their last 12 games.

Solskjaer’s team gave a lap of honour to a half-empty Old Trafford after the loss to Cardiff and those that remained in the stadium were respectful to the players.

However, Pogba encountered some furious fans as he made his way towards the dugout as a supporter was heard shouting ‘Ole! Ole! Sort him out!’ while pointing at the midfielder.


Pogba stood there listening to the fan and a yell of ‘Have some f****** respect’ was aimed towards the France international by another supporter.

The former Juventus star put his hands together in a sympathetic response to the fans and then raised a hand to the crowd before making his way down the tunnel.

Pogba’s future has been the subject of much speculation in recent weeks and he’s believed to be interested in a transfer to Real Madrid.


Ole Gunnar Solskjaer wants to keep the Frenchman but the club fear he’s already made his mind up on a transfer to Santiago Bernabeu.

Sarri reveals why he feels sorry for Klopp & Liverpool

Sun May 12 , 2019
Chelsea head coach Maurizio Sarri conceded he felt sorry for Jurgen Klopp after his team missed out on the Premier League title by a single point. Liverpool ended their domestic season with a routine 2-0 victory over Wolves at Anfield but it proved to be futile win with Manchester City […] 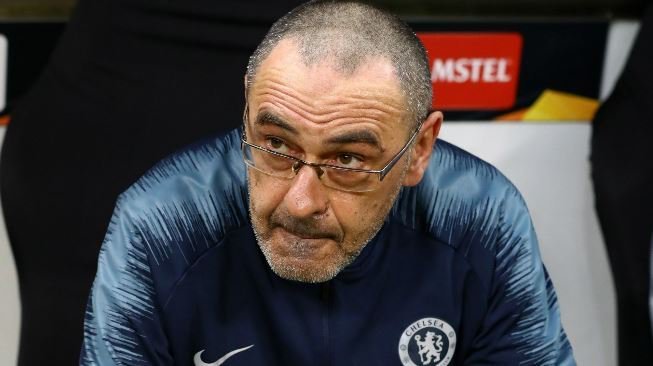