Paul Pogba’s relationship with Ole Gunner Solskjaer is “worn out” and the Manchester United midfielder “wants a transfer”, according to reports.

French newspaper Le Parisien believe a transfer could well be on the cards for the France international.


The stunning allegations will come as a shock to Manchester United fans who have seen Pogba’s best run of form at the club since Solskjaer took over in December.

The 26-year-old has nine goals and seven assists in 19 matches under Solskjaer.

But the Frenchman is without a goal since the FA Cup win over Chelsea on February 18 and his last assist came nine days later against Crystal Palace.

During international duty with France, Pogba conceded it would be a “dream” to play for Real Madrid.

He said: “Real Madrid is one of the biggest clubs in the world. I’ve always said it is a dream club for every player.”


And United’s chances of finishing in the top four and therefore qualifying for the Champions League next campaign taking another hit last week at Wolves, the possibility of a move to Bernabeu may be even more appealing.

However, in the same press conference last month, Pogba told the media he wanted Solskjaer to be appointed as permanent manager at Old Trafford.

“When a player is happy, he wants to keep being happy. Solskjaer deserves it. He knows the club, he knows everything about the club.

“He is a really happy coach that gave confidence back to the players. This gave us the freedom to play and enjoy football again because maybe we lost that with the results we had before.”


And just yesterday, Solskjaer said that Pogba is happy in his press conference previewing the Barcelona game.

“At Paul’s best he can run a game like this. I cannot see him not playing for Manchester United next season.

“He is a Man United player, one of our big performers on the big stage.”

'I made Barcelona win, not Messi', Samuel Eto'o slams Guardiola's treatment of him

Thu Apr 11 , 2019
Former Barcelona forward Samuel Eto’o has accused Pep Guardiola of not understanding the squad despite leading them to their first treble in the 2008-09 campaign. Eto’o had a fall-out with the head coach and found regular playing time limited with Guardiola deciding to field a young Lionel Messi in what […] 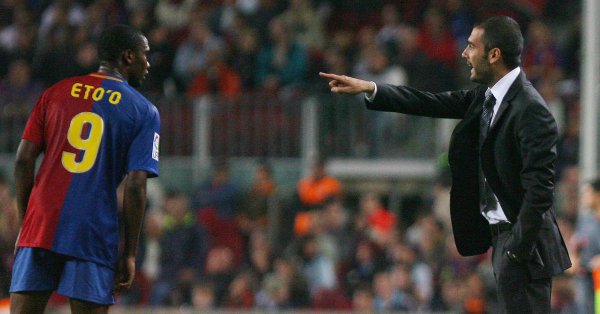