Former Chelsea boss Jose Mourinho has revealed how he was “close to dying” when he was forced to hide in a laundry basket at Stamford Bridge.

Jose Mourinho is one of the Blues’ most successful head coaches and the Portuguese manager won three Premier League trophies and an FA Cup during his time at Chelsea.


When he arrived in London 15 years ago from Porto where he had won Champions League previously, the 56-year-old called himself “The Special One”.

But the nearest he got to winning the European trophy with Chelsea were the semi-finals on three separate occasions.

Mourinho guided his side past Bayern Munich in the quarter-finals of 2005 as Chelsea won the first leg 4-2 at Stamford Bridge before losing the second 3-2, but still progressed with 6-5 on aggregate.

The Portuguese manager, though, did not have direct involvement in the team due to a two-game ban from a clash with Barcelona in the previous round.


He was forced to watch both matches away from the stadium, and Mourinho revealed to beIN SPORTS about the funny way he tried to get round the suspension he was given.

“I went to the dressing room during the day,” the 56-year-old said.

“So I was already there, since midday.

“The game was at 7pm and I just wanted to be there when the players arrived.

“I went there and nobody saw me. The only problem was leaving afterwards.

“Stewart the kit man put me in the laundry basket, a metal one.”

But Jose Mourinho’s plan did not come off smoothly. He added: “I went there with it a little bit open so I could breath.

“But when Stewart were taking it outside the stadium, the UEFA guys, who had heard, were desperate to find me.

And the ex-Manchester United boss revealed how the incident took a different turn.

“When he opened the box, I was close to dying.

Herrera hits out at United flops - Mourinho tried everything!

Tue May 14 , 2019
Ander Herrera believes Manchester United’s players are responsible for 75 per cent of the team’s poor season and has defended former boss Jose Mourinho, saying he “tried everything”. The Spaniard is set to leave Old Trafford following the expiry of his deal this summer, amidst transfer speculation linking him with a transfer to Paris Saint-Germain. […] 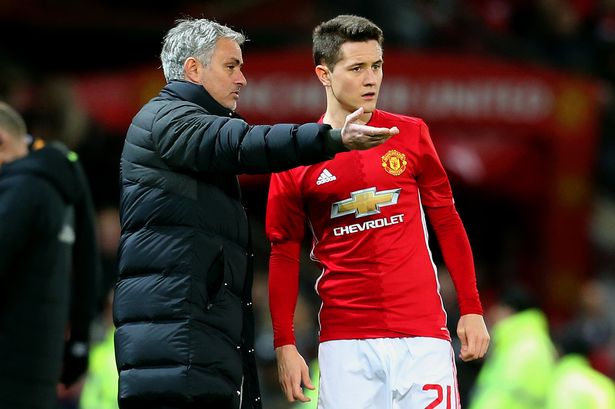