Chelsea head coach Frank Lampard reportedly ripped into David Luiz before his transfer move to Arsenal where he criticised one of his performances in pre-season.


The 32-year-old defender was allowed to join the Gunners on deadline day after the Brazilian was deemed surplus to requirements at the club.

Luiz got his Arsenal career off to an incredible start last week as he started in the 2-1 victory against Burnley, but his real test will be at Anfield in Saturday’s late kick-off.

And while he might have impressed against Burnley, he failed to prove his worth to Lampard during the 5-3 victory against Red Bull Salzburg.

According to the Independent, the ex-Derby manager gave Luiz a “b******ing* over his performance, which created a tension between the two men.


They claim that both Lampard and the former Paris Saint-Germain defender were happy to part ways with Luiz finally joining the North Londoners – two years after a move fell through.

Commenting on how the move materialised, Luiz said: “In talks with Frank [Lampard], he had a different plan for the year. So we spoke in total honesty and he made it clear that he had different ideas from mine.

“So I had this opportunity to receive an offer from Arsenal, which is a great club. I still respect Chelsea. It’s never easy for people to understand everything that goes on.

“But my decision was also to respect Chelsea and their new manager, who wanted to implement a different philosophy a the club. And so I decided to get on this new journey, a new home, where I’ll do everything to shine as well.”


He also claimed he joined Arsenal because he “is a guy with ambition”, and is determined to win more silverware in his career with his new club.

Sat Aug 24 , 2019
Lionel Messi has been ruled out of Barcelona’s game with Real Betis on Sunday after missing their final training session. Messi has been working his way back from a calf injury he sustained after returning late to the Barcelona pre-season after his efforts with Argentina in the Copa America. The forward was not ready in […] 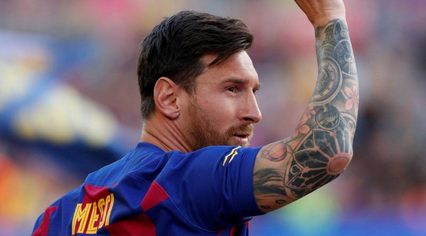