Juve were faced with a difficult task of qualifying after a 2-0 defeat to Atletico in the first leg, while Diego Simeone’s team headed into Tuesday’s match having kept a clean sheet in their last five games.


But Ronaldo hit the back the net three times in Turin to equal Lionel Messi’s record of eight hat-tricks in the Champions League and secure Juve’s place in the quarter-finals.

The Italian champions started the second leg well and had a goal ruled out in the fourth minute after VAR ruled that Ronaldo had fouled Jan Oblak before Giorgio Chiellini put the ball into the net.

Ronaldo opened the scoring in the 27th minute as Ronaldo rose above Juanfran to head home Federico Bernardeschi’s cross past Atletico’s goalie Oblak.

Juve remained on the front foot for the majority of the first half but they could not get their second goal until after the second half as Ronaldo got the better of Diego Godin to send a thumping header towards goal.


Oblak seemed to have pulled off an amazing save to deny Ronaldo but goalline technology alerted referee Bjorn Kuipers to the fact that the ball had slightly crossed the line in the air.

With the tie level, Atletico were struggling to pose any threatening attacks and came close to conceding a third as Moise Kean was put through on goal, but the 19-year-old dragged his shot wide.

But Ronaldo was on hand to decide the tie in the 86th minute after Angel Correa appeared to push Bernardeschi in the area to concede a late penalty.


Ronaldo stepped up to take the penalty past Oblak, who went the wrong way, and eliminate Atletico out of the competition.

Wed Mar 13 , 2019
Borussia Dortmund insist Jadon Sancho will not leave the club this summer despite strong interest from Ole Solksjaer side Manchester United. Sancho, 18, has taken the Bundesliga by storm since making the transfer from Manchester City, notching up nine goals and 15 assists this campaign, and United are prepared to […] 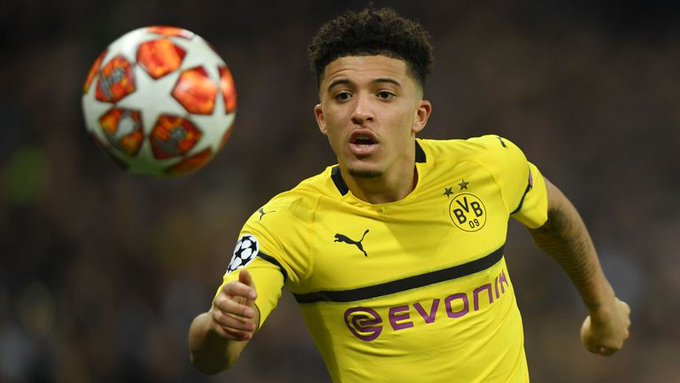