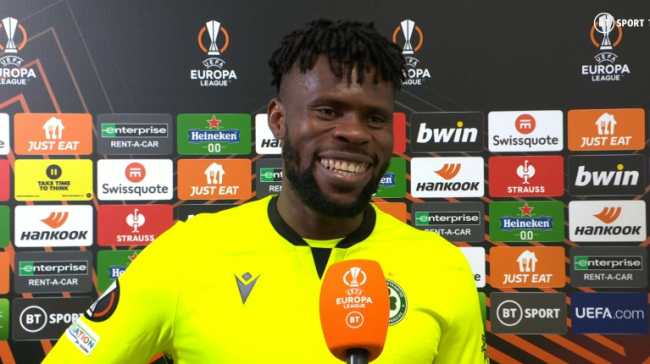 Omonia may have suffered a defeat to Manchester United on Thursday, but Francis Uzoho was not too disappointed after a superb display at Old Trafford which he had prayed for before the match.

Omonia were unsurprisingly dominated by the home team, but the Nigerian keeper was in good form and made a number of impressive saves over 90 minutes as Untied unleashed 34 shots at goal.


Scott McTominay came off the bench and scored United’s only goal of the game in the 93rd minute, but while that was a blow, the 23-year-old was not down after the final whistle.

Uzoho is Omonia’s second choice ‘keeper but got the opportunity due to injury to the first choice stopper Fabiano, allowing him to play against the side he grew up supporting.

‘I am not disappointed because we had a good game, but I would have preferred to get at least a point,’ the Nigerian international told BT Sport, with a beaming smile. ‘But I’m happy, it’s not an easy stadium to play in with these big players, so I’m happy in general.

‘It’s a dream come true for me. I have dreamed to play here for a long, long time. When I saw the draw and figured I’d be playing in Old Trafford, I wanted to play and prayed to God to get an opportunity to play. I got it and I’m happy I played here.


‘I am proud of my teammates, it was not a one man job. We gave everything on the field. I am happy with my performance and that’s it.’

Former Celtic head coach Neil Lennon is in charge of Omonia and was proud of the goalkeeper, who he hopes can continue to turn in that level of performance in future.


‘He really stood up to the challenge, he was inspired, he was unbelievable,’ said the former Leicester midfielder.

‘I’m so happy for him, he’s worked hard, he’s had to wait his time, he’s taken his chance brilliantly. I just hope he can kick on now, stay injury free and enjoy his football

‘That performance tonight was probably the best of his career and he may never better it.’

4 months ago
Paul Scholes believes Erik ten Hag was ‘frustrated’ with his Manchester United players after they needed a late goal to beat Omonia in the Europa League. Cypriot minnows Omonia looked set to secure a famous draw at Old Trafford on Thursday as goalkeeper Francis Uzoho produced an inspired performance to […]