Manchester City manager Pep Guardiola and Sergio Aguero were involved in a heated war of words on the touchline after the Argentine forward was substituted in Saturday’s game with Tottenham Hotspur.


Aguero had scored to put his side 2-1 up at the Etihad Stadium, but he was replaced by Gabriel Jesus 10 minutes after Lucas Moura had levelled the scoreline at 2-2.

However, Guardiola and Aguero later embraced after it looked as though Jesus has scored the winner, only for VAR to rule it out after a handball from Aymeric Laporte.

Aguero appeared to disagree with his manager’s decision to take him off, and angrily spoke to Pep Guardiola as the Man City boss put his hand on Aguero’s chest.

After their frank exchange was broken up by the club’s assistant Mikel Arteta, Aguero made his way to the substitutes’ bench.


Aguero was making his first start of the campaign after coming on a substitute in City’s 5-0 win over West Ham on the opening weekend of the 2019/20 Premier League season.

It looked as though the reigning Premier League champions could be on for a similar margin of win when Raheem Sterling headed them into the lead in the first half, only for Erik Lamela to quickly equalise for Tottenham when his effort fount the net from distance.

Aguero – who is Manchester City’s all-time top goalscorer – restored the lead with a close range finish from Kevin De Bruyne’s cross before the break, only for Lucas Moura to level again with a fine header just 19 seconds after coming on.

It was 10 minutes after the goal that Guardiola opted to make the change to bring Jesus on for Aguero, with the 31-year-old looking visibly furious as he left the pitch.


Guardiola attempted to put his arm around the Argentina international, but the forward shrugged off the efforts of his head coach and headed straight for the bench.

After the game, Pep Guardiola spoke on the incident: “Sergio believed I was upset with him for the goal we conceded. I wanted one on one movement. He thought I was upset with him. Emotion is part of our game. We talked after and during. He’s a guy I love a lot.”

Sat Aug 17 , 2019
Real Madrid manager Zinedine Zidane completed an astonishing transfer U-turn by confirming Gareth Bale’s place in his team for the coming campaign. After six years at the Santiago Bernabeu and four Champions League victories, Gareth Bale’s number appeared to be up over the summer window. Having barely been taken into account by Zinedine […] 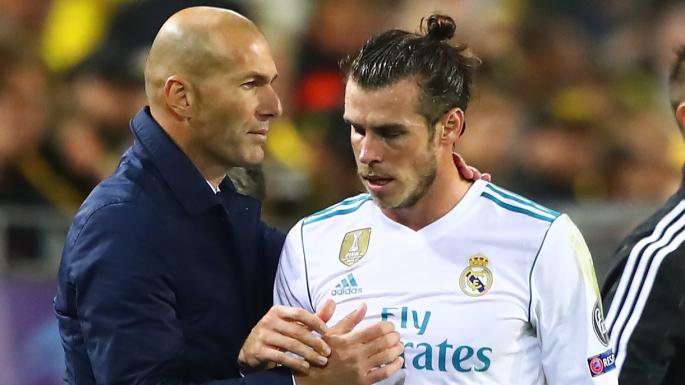