Chelsea forward Eden Hazard has confirmed that he has made a decision on his future at the club, with the Belgian suggesting that he will be leaving Stamford Bridge for Madrid.

Talks between Madrid and Chelsea regarding Hazard have been ongoing for some time, though there has been some hope in London that the forward may still sign a new deal, with his current deal set to end last year.


Chelsea are demanding €130 million for their star player, who came off the bench against Leicester City to make what may be his final Premier League game in a Chelsea shirt.

The draw with the Foxes saw Sarri’s side secure third place in the table having ensured they would be playing in the Champions League next campaign with a victory over Watford in their penultimate league match.

“No, I don’t think so,” Hazard told reporters when asked whether the guarantee of playing in Europe may persuade him to stay. “I have made my decision, that’s it.

“I’m still waiting [for the situation to develop]. Yes [I told the club] a couple of weeks ago.


“I have made my decision but it is not just about me. We have a final to play and then I will see. I wanted that [to have the situation sorted out] but that’s not happened. I’m still waiting like you are waiting and like the fans are waiting.”

16 goals and 15 assists represents Hazard’s best season in the Premier League, and the loss of the 28-year-old will be hard felt, as he was the only player at Chelsea to register in double figures for either goals or assists.

Despite being named among the substitutes against Leicester, Hazard remained the focus for fans who chanted for him to stay throughout the game.

There was also a banner held up in the away end as supporters attempted to convince their star man that read ‘Eden Hazard bleeds blue, Chelsea is your home’.

A final thumbs up was given to fans after the match, and despite all the speculation around his future, Hazard denied that it has distracted him when on the pitch this campaign.


“I have never, never been distracted,” Hazard continued. “When you are on the pitch, you try to be focused on the pitch with the ball. That’s it.

“When I am on the pitch I just try to do the best. I am not thinking about this and this, my situation or the club’s situation. I just try to win games.”

Mon May 13 , 2019
Jurgen Klopp has warned Guardiola that Liverpool are still on the ‘first step’ of their journey and will ‘be there again’ next campaign to challenge for the Premier League title. Liverpool’s spirited fight for their first trophy in 29 years ended in failure despite a 2-0 victory over Wolves on […] 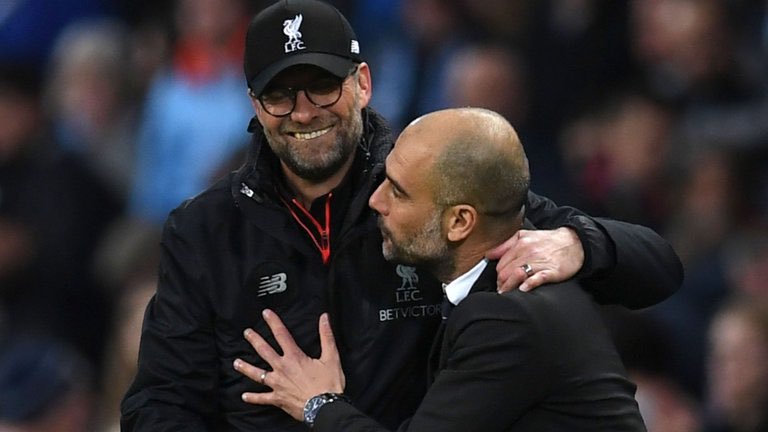