Jurgen Klopp says Liverpool’s defenders were partly to blame for the error from Adrian that ensured a nervy final few minutes for the club in the 2-1 win over Southampton at St Mary’s.


After a very slow start in the first half, a stunning strike from Senegalese forward Sadio Mane gave Liverpool the lead just before the break.

Mane then teed up Firmino to make it 2-0 in the second half, but with Liverpool well on top they shot themselves in the foot when goalkeeper Adrian passed the ball straight to Danny Ings, who fired home.

Ex-Reds forward Ings then missed a glorious opportunity to make it 2-2 late on, but Klopp wasn’t blaming Adrian – who survived an injury scare to play in the match having recovered from the ankle knock he picked up when a celebrating fan ran into him after the European Super Cup win on Wednesday.

With Alisson expected to be out for at least another month with an injury, there were suggestions that 35-year-old Andy Lonergan might be needed to start the match for Liverpool, but the veteran stopper could only make the bench.


And Klopp – who joked that Adrian was copying Alisson’s blunder in the 2-1 win over LeicesterCity early last campaign – said his defenders put the keeper under too much pressure.

“Adrian had a swollen ankle and we played too many of the balls back to him,” said the Reds boss. “If you saw his ankle on Thursday even that pass which led to their goal would have been better than expected!”

The victory was Liverpool’s second in their two Premier League matches this campaign, with midfielder Alex Oxlade-Chamberlain playing for 89 minutes in what was his first Premier League start for 16 months.

“The main thing is the three points for the team, whether I’m on the pitch or not,” he told BBC Sportafterwards.


“But on a personal level it is great to be back out there and contributing to a good solid performance.

“That’s what you miss. I’ve been working hard to get back to this point, I’ve had iffy moments along the way, but I have to keep reminding myself it is a long journey back to where I want to be.”

Guardiola held back after heated touchline row with Sergio Aguero

Sat Aug 17 , 2019
Manchester City manager Pep Guardiola and Sergio Aguero were involved in a heated war of words on the touchline after the Argentine forward was substituted in Saturday’s game with Tottenham Hotspur. Aguero had scored to put his side 2-1 up at the Etihad Stadium, but he was replaced by Gabriel Jesus 10 minutes […] 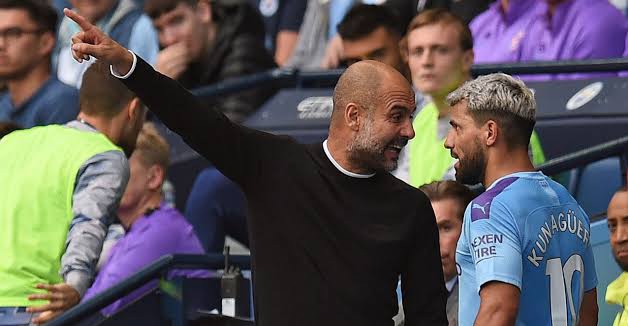