Romelu Lukaku was told he can leave Manchester United for a move elsewhere during showdown talks yesterday.

The Belgium international returned from his holiday in America to have talks with Old Trafford officials over his future at the club.

And United have made it very clear they will allow him to move to Inter Milan should the Italian club offer a deal worth just over the £75million they paid Everton to sign him two years ago.


Vice-chairman Ed Woodward will reject any offer lower than that but could consider Inter players being part of the deal.

Slovakia centre-back Milan Skriniar has been on United’s radar for a while while Ivan Perisic is another player they have are interested in.


United will not pay up any of Romelu Lukaku’s £225,000-a-week wages on the three years remaining on his deal, which means Inter will need to agree lucrative personal terms to get him to Italy this summer window.

Juventus are also monitoring his situation and will likely join the race for Lukaku – but Antonio Conte is in the front position to take him to the San Siro.

Lukaku has not handed in a transfer request but his agent Federico Pastorelli has made it clear his client would seriously consider a transfer.

He had spells out of the team last campaign and towards the end of the season was hampered by a hamstring injury.

Thu May 30 , 2019
Olivier Giroud has caused some controversy in the wake of Chelsea’s 4-1 Europa League final win over Arsenal, having been filmed thanking his former team Arsenal as the Blues left the Olympic Stadium in Baku. Giroud left the Emirates in January of 2018, signing an 18-month deal with Chelsea after […] 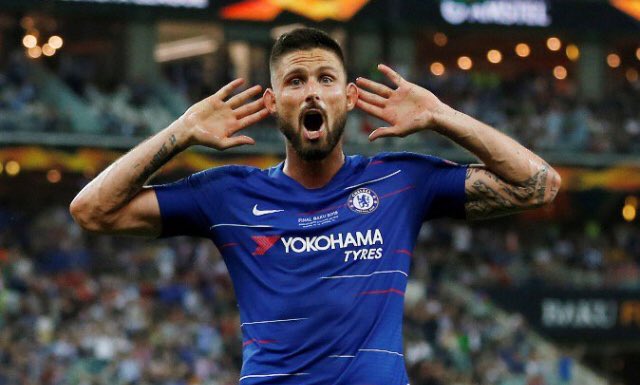