Moussa Dembele is set for a £20 million move to Lyon, after agreeing to a five-year contract with the Ligue 1 team.

Celtic had announced they had accepted a bid for Dembele earlier Friday, with Lyon president Jean-Michel Aulas confirming this following his club’s 1-0 defeat to Nice that a contract had been agreed.


While Dembele had been linked to Marseille and Borussia Dortmund, links to Lyon heated up after the club sold Mariano Diaz back to Real Madrid earlier in the week.

Celtic initially refused to release the forward, with manager Brendan Rodgers confirming offers had been made for the player but that it was unlikely Dembele would leave.

Earlier Friday, Dembele posted a message on social media, claiming he believed promises were broken in the club refusing to allow him join Lyon.

A statement from manager Rodgers has now claimed Celtic never promised Dembele could leave, but conceded the club has accepted the latest offer from Lyon, making the way for the striker’s departure ahead of the transfer deadline.


“Every decision we make at Celtic will always be in the best interests of the club and our supporters,” the statement said.

“It is vital to make clear that we have never promised any player that he can leave the club at a particular time. It has never happened. In fact, we have said all along that we did not wish to sell Moussa, given the circumstances within the transfer window and that is why we rejected a significant offer yesterday.

“However, this particular decision to accept this offer has been taken in order to serve the best interests of the first-team squad, my coaching team and the culture and environment we have created in these last two seasons.

“The Board and myself are united and they have been very supportive to me on this issue.”

The statement concluded with: “Finally, I would like to thank Moussa for his contribution in our last two seasons and want to wish him well in his new adventure at Lyon.”


Dembele moved to Scotland on free transfer two years ago, coming off a 15-goal season with Fulham, then in the English Championship.

The striker scored 17 goals in the Premiership in his debut campaign and followed that up with nine goals last season – both coming in Celtic title-winning seasons.

Sat Sep 1 , 2018
Unai Emery has confirmed that Mesut Ozil has been asked to play on the right wing for Arsenal. The 29-year-old was mainly used in the No.10 role during Arsene Wenger’s reign but Emery is demanding the midfielder to be more flexible in his own system. Emery has denied that he […] 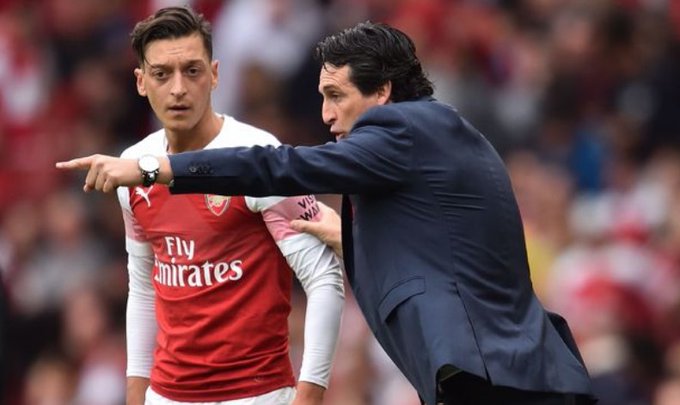