Liverpool forward Sadio Mane has downplayed speculation linking him with a transfer to Real Madrid this summer.

Spanish giants Real have reportedly made the 27-year-old a top target ahead of the summer transfer window.


This campaign, Mane has scored 25 goals for the Reds, helping Jurgen Klopp’s team challenge for the Premier League and Champions League.

The Senegal star is currently in Barcelona with Liverpool’s team ahead of the Champions League semi-final first leg tie on Wednesday.

Mane was asked if he would be interested in playing in Spain.

He said: ‘I think you guys write it [the rumours]. I just read it with my friends. ‘I respect the [Spanish] league, it’s a good league with great players. But the Premier League is also a wonderful league, everyone wants to play here.

‘I have this opportunity [at Liverpool] so I think it’s cool.’

Mane also reiterated his commitment to Liverpool this month when he insisted he wanted to become an Anfield legend.


He said: ‘Of course I want to be a legend not only for Liverpool but also in the Premier League story and that is one of my targets.

‘Like I have always said, I am very happy to play for this club and every single day I am enjoying being here and trying to do everything to win something for this club.’

Mane, meanwhile, says he is desperate to help Liverpool advance to the Champions League final by beating Barcelona in the semis.


‘I try everything to help the team get a positive result,’ he added. ‘I am excited and hopefully tomorrow I will score for the team.

‘It’s a wonderful stadium. I have been watching Barcelona since I was young.

‘All of us love to watch football, and it will be great for us to play in this kind of stadium. But it will be motivation for us, not pressure.’

Wed May 1 , 2019
Porto goalie Iker Casillas has suffered a heart attack, according to reports from Portugal. The former Real Madrid legend has been taken to Hospital CUF but is believed to be in a good condition. Porto confirmed the news to Portuguese television channel TVI. The goalkeeper is expected to be ruled […] 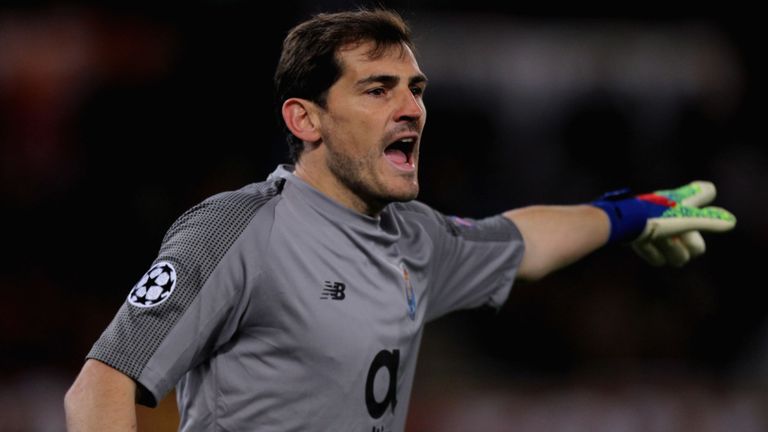