Paul Pogba has confirmed he could leave Manchester United in the January transfer window.

The midfielder, who helped France win the World Cup earlier in the summer, is said to have a bad relationship with Jose Mourinho.

After returning to Old Trafford from Juventus in 2016, Pogba’s second spell at United has been filled with reoccurring reports of bust-ups with Mourinho.


Pogba was thought to be keen on a transfer to Barcelona before the summer transfer window closed and he has refused to rule out an exit in January.

‘There was a lot of talk, but it was just like that, I’m under contract in Manchester,’ he told Sky Germany.

‘My future is currently in Manchester, I still have a contract, I’m playing there at the moment, but who knows what will happen in the next few months.

‘One thing I can assure you: I will always give 100 percent, no matter which coach I always give everything for United – I cannot say more.’

Asked about his relationship with Mourinho, Pogba said: ‘We have a pure coach-player relationship, that’s right.’

Amid rumours linking Pogba with a move to Barcelona, Luis Suarez says the France international would be welcome at the Nou Camp.

‘He has a lot of quality and he’s one of the references at United. I think he would like to be competing for more than he is at the moment.

‘He’s not a player that belongs to Barca, but he would always be welcome.’

Pogba hinted at his frustrations at Manchester United last month after a Premier League match by saying ‘there are things I cannot say otherwise I will get fined’.


Having lost consecutive league games to Brighton and Tottenham, United bounced back with an important win over Burnley before the international break.

Thu Sep 6 , 2018
Chelsea midfielder Jorginho agreed terms on a move to City before moving to Stamford Bridge, but Napoli failed to agree a fee with the English champions, the player’s agent has confirmed. The Italy international signed for the Blues for £52m after leaving Serie A, following Maurizio Sarri to the club […] 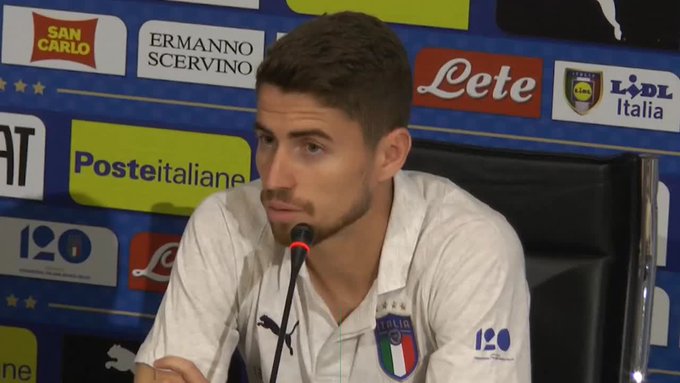