Manchester United star Paul Pogba wants to leave Old Trafford this summer and is determined to push for a transfer even if the club refuses to sell him.

Pogba, who was signed from Juventus for a then-record €100 million three years ago, is under contract at United until June 2021, with an option for an additional year which could be triggered only by the club.


However reports claim that, with United failing to qualify for Champions League and in need of a rebuild after a fruitless end to the season, the Frenchman wants a new challenge, with his agent, Mino Raiola, likely to begin talking to United once the season is over.

United’s stance publicly is that Pogba is not for sale at any price, though they value him at €160m in case they ever open the door for an exit. Real Madrid, who are the only club Pogba wants to join, will try to lower the transfer fee to around €120m, sources add.

The 26-year-old admitted back in March that he dreams of playing for the Spanish giants but said he was happy at Old Trafford. However, things have changed since.


A possible move to Barcelona last summer was blocked by United executive chairman Ed Woodward, who still doesn’t want to lose Pogba who is seen as important to the club’s marketing plans and on the pitch.

United’s form has dropped in the league, culminating in their failure to finish in the Prem’s top four. And their draw at Huddersfield was one of their worst performances of the season.

Pogba’s performances have equally hit a low in the past two months after a remarkable revival following Jose Mourinho’s sack and Solskjaer’s appointment in December.

His frustration bubbled over last month when, after United’s 2-0 defeat to City, he refused to speak to French media for fear he might say something he will later regret.


News of his desire to leave United comes two days after his brother, Florentin Pogba, told Spanish newspaper AS that “things will happen in the summer” regarding him.

Mourinho reveals how he kept Messi in 'jail'

Tue May 7 , 2019
Jose Mourinho has revealed how his tactics kept Lionel Messi in “jail” during Inter’s victory over Barcelona in the 2009-10 Champions League semi-final.  Barca were at the height of their powers going into the semi-final, but Inter famously defeated Guardiola’s side despite having most of the possession to their opponents.  Inter won the first […] 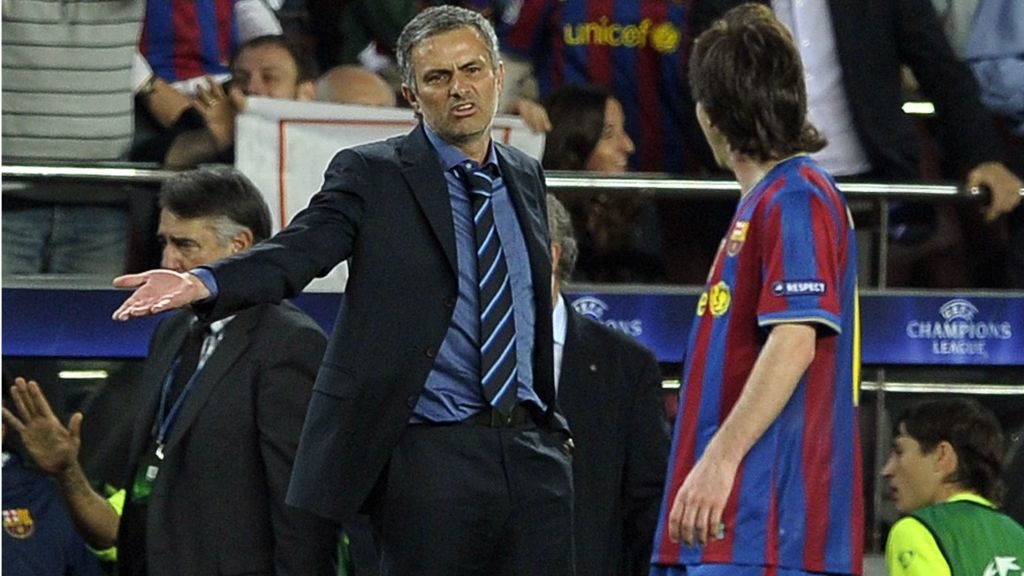