Chelsea manager Maurizio Sarri has taken a swipe at Arsenal as he defended his record with Chelsea and believes he is being unfairly criticised compared to Unai Emery.

The Italian oversaw a 3-0 victory against Malmo in the Europa League last 32 to progress to the next round, though his side have struggled domestically, knocked out of the FA Cup and thrashed 6-0 at the Etihad.


Sarri faces pressure at Stamford Bridge amid speculation he could be sacked, but he is surprised by why he faces so much more criticism than Arsenal.

Asked by Sky Sport Italia if he was one defeat away from being sacked, Sarri replied: ‘I am not interested, to be honest.

‘I have to think of my work as a big picture issue, otherwise I’d do my work badly. So I continue along my path and nothing has changed, as far as I am concerned.

‘I keep hearing people praise Arsenal’s season, but they are not in the Cup Final, they have fewer points than us in the Premier League and reached the last 16 of the Europa League just like us.


‘I don’t understand why people act as if our season is so negative and Arsenal’s is impressive.

‘It’s true there have been many peaks and troughs, including some very deep troughs, but considering it’s my first season in a new league and environment, I think that’s acceptable.

‘I did take over a team that finished fifth with 70 points.’


Chelsea face an enormous period in their campaign, first facing Manchester City in the Carabao Cup final on Sunday before facing Tottenham in the Premier League just three days later.

Exclusive: Chelsea to move for Steve Holland if they sack Maurizio Sarri next week

Sat Feb 23 , 2019
Chelsea will consider making a move for England assistant manager Steve Holland if they sack manager Maurizio Sarri next week. Despite progression into the next stage of the Europa League, Sarri is on the brink of being sacked ahead of Sunday’s final against Manchester City and Wednesday’s Premier League game […] 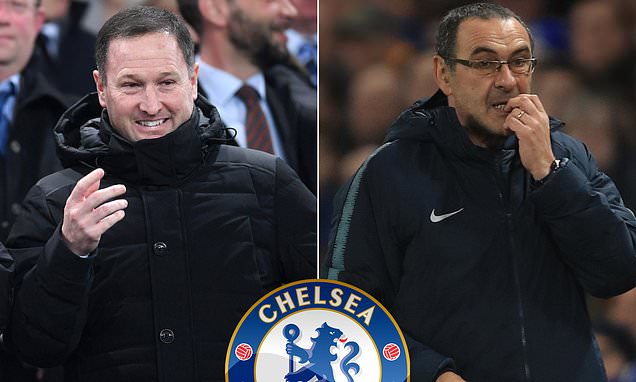