Douglas Costa’s agent has claimed that Manchester United had a ‘strong interest’ in the player this summer, but Maurizio Sarri had no intention of allowing him leave Juventus.


Injury problems meant Costa only managed seven league starts for Juventus last campaign and the 28-year-old was heavily linked with a move away from the club ahead of the 2019/20 season.

However, Sarri – who took over from Massimiliano Allegri in mid-June – sees Costa as an important part of his project at Juventus and stood firm while the Brazilian’s future was in huge doubt.

Costa has since started Juventus’ two opening games of the campaign against Parma and Napoli, making two assists against the latter at the Allianz Stadium.


‘The interest of Manchester United was strong, a club that has always been interested in the Brazilian. It was not the only club but in England it was certainly the most active team on the trail of Douglas Costa.’

Branchini says Costa is determined to take his game to the next level after a frustrating campaign under Max Allegri last term.

‘Douglas has had countless health problems,’ he added. ‘Last season he was very often injured. He is wanting to recover with great professionalism after standing still.

‘Juventus never intended to sell him despite the big pressure from United.’


Branchini refused to rule out Douglas Costa joining a Premier League team in the future despite United’s failed pursuit this summer window.

‘Douglas is a “cool” professional in the best sense of the word. He is able to adapt to everything,’ he said.

‘Just think of how well he did in Ukraine, in a country totally different from Brazil. He loves Juventus but is able to adapt to every reality.


‘The Premier League is a beautiful championship but for now United have failed in all their attempts to convince Juventus to sell him. The player remained in Turin and is a champion.’

Tue Sep 10 , 2019
Barcelona player Samuel Umtiti has laughed off reports that Arsenal tried to sign him over the summer despite Alexandre Lacazette making a plea for him to join. Arsenal head coach Unai Emery was eager to strengthen his defence during the summer transfer window and eventually signed David Luiz from Chelsea in an £8million deal on deadline […] 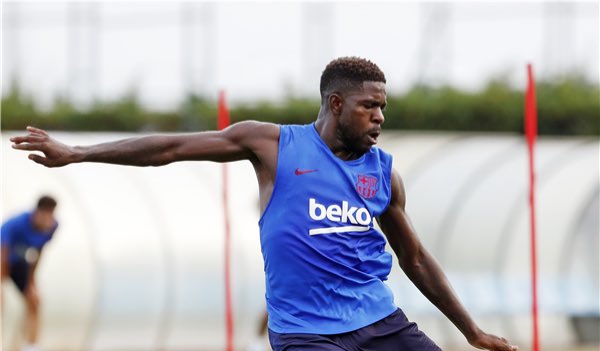