Arsenal midfielder Mesut Ozil was forced to “run for his life” as he and team-mate Sead Kolasinac were the victims of an attack by knife-wielding moped thugs in London.

German star Ozil was seen racing down Golders Green Road in his black Mercedes G-Class SUV as the thugs chased him.

Kolasinac is then seen coming down from the £100,000 vehicle and fighting off the armed robbers with his bare hands.


Ozil then abandoned his car and fled the road on foot, staying in a nearby Turkish restaurant Likya. And staff immediately rushed to his defence, going out to the street to help chase the attackers away.

Police arrived on the scene, and they were spotted questioning the Arsenal forward on the pavement over the shocking incident.

Financial worker Azuka Alintah, was out food shopping when she witnessed the event. He told the Daily Mail: “It was totally mad and strange. His car was standing there empty in the middle of the road with its door hanging open. It is very distinctive, with gold trim.


“Ozil looked absolutely terrified, as anybody would after being chased by men with knives. He looked like he was running for his life. And I suppose he was.

“I saw him disappear into the restaurant with the motorcycle guys on his tail. They didn’t take off their helmets and were all in black, wearing long sleeved tops in this hot weather. They stood out. It was really creepy.

“God knows what would have happened if they’d caught him. It looked to me like he’d have been hacked to shreds and he clearly thought so too.”

The eye witness added: “As soon as the restaurant staff started to come to the window and to the doorway, they turned around and roared off. The police were there shortly afterwards and the road was almost blocked off.’


“It was totally surreal, just surreal and strange. You don’t expect something like that to happen at any time, particularly the mid-afternoon.”

The restaurant manager also confirmed the incident but refused to comment on the scary ordeal.

Fri Jul 26 , 2019
Italian club Napoli have agreed a deal in principle to sign Ivory Coast winger Nicolas Pepe, according to Lille president Gerard Lopez. The 24-year-old has been linked with a move to several top clubs – including Manchester United – after scoring 23 goals in 41 matches last campaign, firing Lille […] 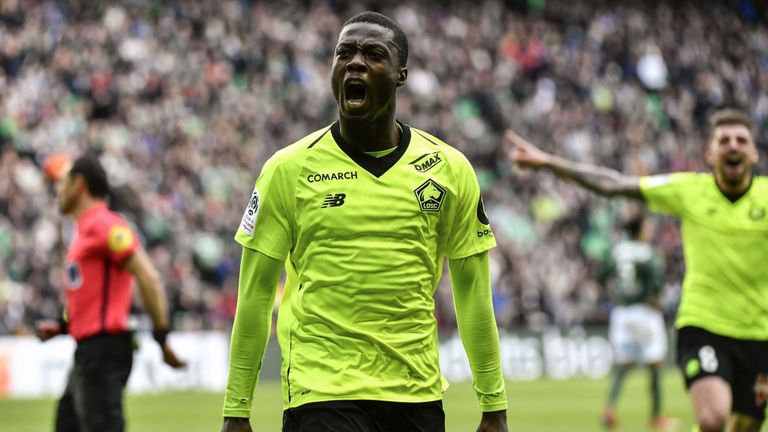