Paulo Dybala failed to secure a transfer move to Manchester United because there were issues between the Premier League club and Juve, according to his agent.

However, The move failed to materialise with reports suggesting Dybala’s wage demands and his agent’s commission fees were the reason behind the collapse of the deal.

However, agent Jorge Antun, speaking to Tuttosport, said: ‘Yes I talked to the English club, but the stories about the commission were not true. There were simply issues between the two clubs.’

While the Red devils failed to sign Dybala, they did agree summer deals for Harry Maguire and Aaron Wan-Bissaka and also Swansea midfielder Daniel James.


United began the campaign with an impressive 4-0 win over rivals Chelsea, but were held to a 1-1 draw by Wolves on Monday and lost to Crystal Palace this weekend.

Reacting to the shock result, Eagles manager Roy Hodgson said: ‘It was hard work and the players showed incredible concentration on the tactics they were trying to employ.

‘We kept Manchester United in front of us for very long periods. It was a long, hot afternoon and we had to accept our talented opponents would have more of the ball than us.

‘We had to make certain that they did not play the passes to get the balls into the areas where they would punish us too severely. It was a heroic victory.’


Solskjaer, meanwhile, said: ‘They scored two and we scored only one. We just were not clinical enough in front of goal and they scored two very easy goals.

‘I thought we got our act together second half, we just couldn’t hit the target. We have dominated the game but we have not controlled it.’

Mon Aug 26 , 2019
Frank Lampard has pleaded with France head coach Didier Deschamps to let N’Golo Kante skip international duty so the midfielder can recover from injury. Chelsea’s new manager claims Kante has had four years of playing continuously and the exertions are starting to take their toll on him. Kante had an […] 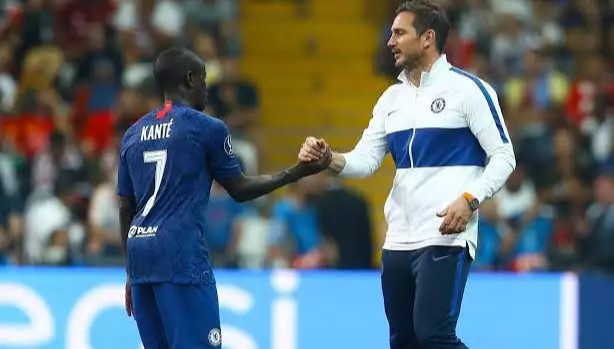