Ole Gunnar Solskjaer reportedly told his Manchester United players they were ’embarrassing’ him during and after the poor loss to West Ham.

The Red Devils dropped points for the fourth time in six league games on Sunday as they suffered a 2-0 defeat to the Hammers at the London Stadium.


Andriy Yarmolenko and Aaron Cresswell were on target for the hosts in a victory which saw Solskjaer lose his temper with his team during and after the game.

According to The Sun, Ole Solskjaer tore into his players at half-time and in the dressing room after the match and accused them of ’embarrassing’ him as an head coach.

Van Dijk: You can’t compare me and Lionel Messi

The manager was also privately critical of his team’s work-ethic and accused them of ‘panicking’ in the final third, with the club scoring only five goals in their last six games.

Manchester United enjoyed a good run under Solskjaer after he replaced Jose Mourinho but, since handing him the job to him permanently, the club have struggled.

Despite this, Manchester United’s executive vice-chairman, Ed Woodward, has offered Solskjaer his backing. Announcing record financial revenues of £627.1m for the year ending 30 June, Woodward said he was optimistic for United’s future.

He said: ‘The progress we’ve made on the business side underpins our continued investment in the football side.

‘Much of the investment in the academy, the recruitment department and the training ground facilities is not immediately apparent to those on the outside, but we believe we have put the building blocks in place for success.

‘While we are confident this investment will deliver results it is important that we are patient as Ole and his team build for the future.

‘We intend to get back to the top of English football. Our growing global fan-base demands success, and success means winning trophies.

‘That target and that standard has never changed for Manchester United and we will continue to focus on the long-term strategy and won’t be influenced by short-term distractions.

‘We want to return to the roots of our club’s ethos of youth-led, attacking football and we will continue to make the necessary investments to make it happen.

‘This long-term approach to building a squad is the right one.’

Wed Sep 25 , 2019
Liverpool goalkeeper Alisson Becker feels he is “nearly there” as he continues his recovery from the calf injury he sustained on the first Premier League game of the season. The Brazil international has been out of action since coming off in the 39th minute of the 4-1 victory over Norwich […] 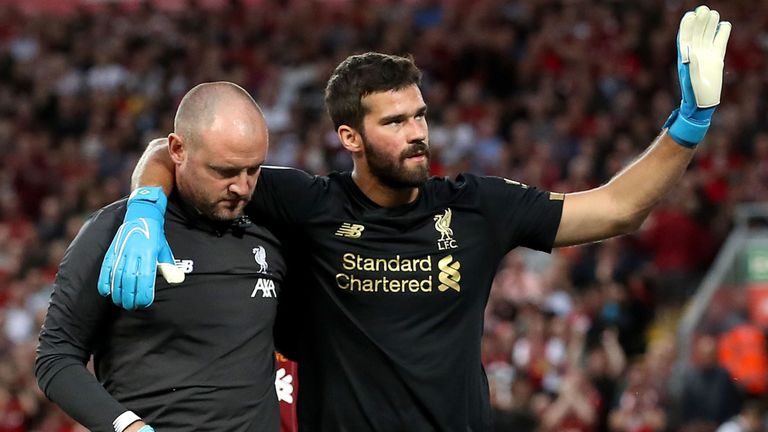