Eintracht Frankfurt will ‘double up’ on Eden Hazard as they look to thwart the Chelsea forward in their Europa League semi-final game.

The Belgium international is enjoying another incredible season at Stamford Bridge, scoring 26 goals and contributing 15 assists in all competitions.


Frankfurt manager Adi Hutter rates Hazard as ‘one of the top three’ players in the world and is ready to ‘double up’ on him in the Europa League clash.

‘He is one of the best players in the world, who other big clubs want to have,’ Hutter said.

‘In duels he is great, very dynamic. You have to double up on him and you have to try to take him out of the game.

‘With his qualities he is one of the top three in the world.’


Sarri has been on the wrong end of some criticism from Chelsea supporters this campaign but, as the 2018-19 season draws to a close, his side are still fighting on two fronts.

Chelsea look set to secure a top four finish while they could also qualify for next year’s Champions League by winning the Europa League title.

On Sarri’s approach and the blues form, Frankurt coach Huttler added: ‘A coach like that needs some time, they are dynamic and I can clearly see Sarri’s handwriting in this team.


‘I did say they are the favourites. But we will have our chances, it is two matches and we can hurt an opponent.’

Sarri, meanwhile, says he expects a difficult game as he bids to take Chelsea to the final.

He said: ‘They are a dynamic team with a great intensity and physicality with the same characteristics as Prague, but the quality is better, especially offensively.

‘So it will be difficult to get to the final.’

Thu May 2 , 2019
Lionel Messi criticised Barcelona supporters for their treatment of Philippe Coutinho after his team’s 3-0 Champions League victory against Liverpool. Over 98,000 spectators were in the Camp Nou for a masterclass from Messi, who scored a brace in the second half to leave Liverpool needing a miracle at Anfield. Despite […] 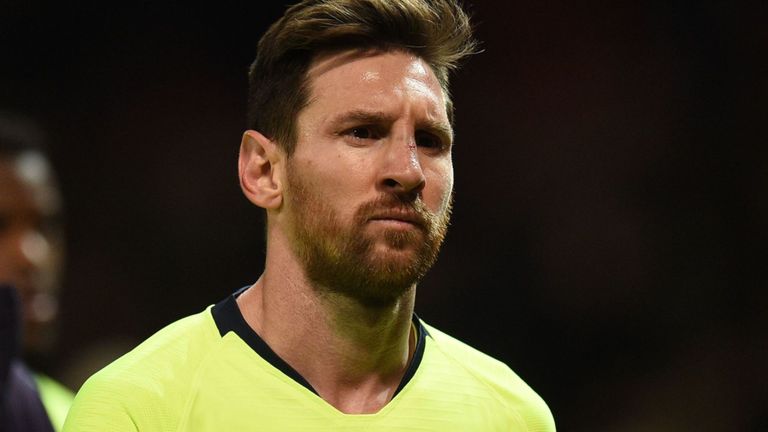